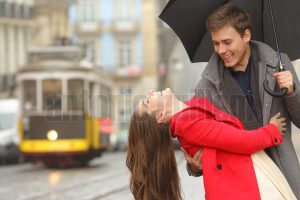 Sometimes a photo implies an added difficulty as it is the case of this shoot. The yellow tram, which was the one we liked for the photo, passed every 20-30 minutes, so we were taking different photos and when we saw it coming,

I started to shout “tram!” and immediately Laura and Mario left whatever they were doing and composed the photo. This speed generated a funny moment and uncontrolled laughter that we had to alleviate before the tram reached the optimum point.

It only gave time to make three photos each time the tram was in an acceptable position. In addition, the umbrella generated shade on the faces of the models and this had to be removed slightly only at the time of the photo.