This session has been very interesting, because for one day we have literally gotten into the clothes of a dentist. We had an entire office at our disposal and all the instruments that were there.

At first a girl explained exactly what everything was used for and how it was used, on the one hand she helped us a lot to not make mistakes when making the photos and on the other, it is interesting to get an explenation about all those things you see every time you go to the dentist but never knew what they were for.

As always, we have had technical problems that have made the work somewhat more difficult, one of them, was that the office was very small and with all the photographic equipment we had, it was a little hard to move.

But in the end, as always, we have overcome difficulties, learning interesting things and laughed a while between photos. 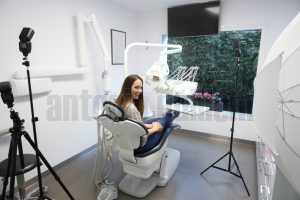 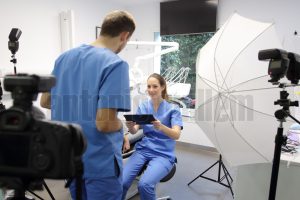 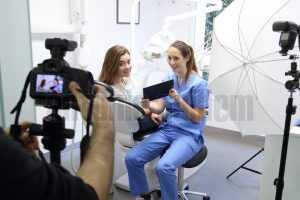 When I was offered the dentist office, which I greatly appreciate, we set to work immediately. Because of the availability of the office, we had less than a week to prepare everything. I approached the clinic a few days before to see the possible scenarios and to be able to prepare the session with greater precision. We bought clothes and medical supplies of all kinds, and I wrote everything I could think of for the session.

The main problem we encountered was the space. Obviously a dentist’s box is not designed to make room for a photographer’s flashes and, although it was grate for it`s function, it was torture to illuminate. The flashes were very close and the light was somewhat hard, it also reflected on the glass surfaces making the shots much harder and those crystals, which were green, dyed the faces of the models leaving a dominant green but irregular shape. Apart from that, it was difficult to take the proper distances to achieve pleasant deflections with which we had to be in very uncomfortable positions, forcing the shots very much.

Some of these somewhat forced situations were comical and served to quite relax the atmosphere between laughs, in a session that wast technically stressful.

In the end, we managed to get 31 photos that have started to sell very well. At this rate, I estimate that we will get profits after a year and a half of sales. 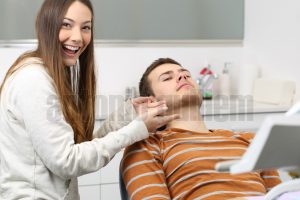 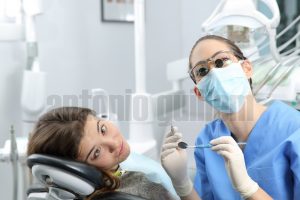